I’ve just returned from Barra where I spent the week surfing with the fantastic crew from Coast to Coast, who are based in Dunbar East Lothian. It was a fantastically refreshing week, where I had the opportunity to completely disconnect from work for the first time in probably around 8 months. 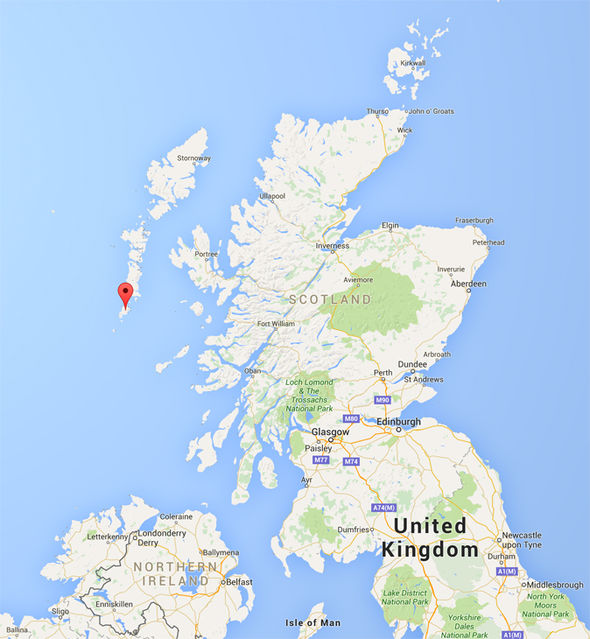 I first experienced the magic of Barra about this time last year when three friends and I cycled around the island and part of South Uist. Words cannot describe how magical a place it is. As the ferry enters the bay that shelters the main village of Castlebay (aptly named because of Castle Kisimul that sits in the water just off the coast) off in the distance you can see the fine white sandy beaches juxtaposed against the dark green of the verdant hills and the deep blue and turquoise of the clear water.

I was met off the boat by our instructors for the week – Jake and Davide – as well as the four other people I’d be sharing the week with.

We drove in convoy up to the very north of the island – past the famous Barra Airport where planes land upon the beach – to our campsite for the week, Scurrival.

It was already 8 o’clock by the time we put up our tents and had something to eat, but we were buzzing with energy since it was our first night and decided to drive to the north airport beach to have our first surf of the week. As the light slowly faded on the long summer evening we surfed for around two hours until it was almost too dark to see the waves anymore, about 11 o’clock.

Whenever people find out that I can surf, they invariably ask “are you any good?” to which my reply is that I’m not very good but I really enjoy it. This week I made a lot of progress to the point where I am now able to intermittently surf green waves. For those of you who aren’t surfers or who have never tried it before, when you first start off surfing you normally use a foam board (“foamie”) which can be 9ft or longer, and you surf it on the whitewater which is slightly easier to catch and more forgiving of mistakes. As you get better at “popping up” (or being able to stand up on the board) you can progress to further back in the sea – the “green waves” or the “line up” where you aim to catch the wave at the sweet spot where it is just about to break, and surf down the wave either right or left depending on how the wave is breaking.

By the second day I had already caught my first green wave and I remember feeling a massive sense of elation. Whenever I surf I always have a strange thought that people who run casinos or who created one-armed bandits must have studied surfing to understand addiction. Surfers wait sometimes for hours trying to catch a wave – trying to catch the Perfect Wave – and get battered in the process – it’s extremely hard work. But when you do catch that wave the sense of elation or the “stoke” is a massive dopamine spike that energises you and leads you to – no matter how tired you were feeling before – get back out to try and catch the next one. It reminds me a lot of similar principles in mindfulness and meditation which is why I think probably some surfers are quite philosophical and disciplined and patient.

A storm hit the island on Wednesday and Thursday with winds going about 40 to 50 miles per hour. However our masterful instructors had carefully and painstakingly studied the weather and had hypothesized that between 3 a.m. to 6 a.m. on Wednesday morning there would be a period where there would be no wind and that would be our only opportunity to surf that day. So that morning we awoke at 3 a.m. and were leaving the campsite by 3:15. We surfed for 2 hours as the sun rose and the light increased.

We got back to the campsite and there was no wind. The instructors took down their tents as did a few others but I decided that it didn’t seem that bad and I would be able to continue sleeping in my tent. Within an hour, the wind had picked up to an incredible speed and was smashing the tent and waking me up every 10 minutes. I learned that moment never to doubt a surfer’s sense of the weather!

The next two days we were unable to surf because the wind was too strong but we did get to have a body boarding session on the south beach on Vatersay. Vatersay is a much smaller Island than Barra, connected at the very south of Barra by a causeway – but is probably my favourite part of the whole place. It has a magical sandbar beach as well as several other hidden white sandy beaches which are delightful.

Whilst body boarding we were even joined by a seal on one of these beaches. Next time I go back, I would really like to do a stand up paddle (SUP) between Battersea and a small uninhabited island about half a kilometre away from it called Sandray.

Without going into every little detail of the trip we also had fantastic food including fresh Barra langoustines cooked in garlic butter, Barra battered haddock and chips and even a prawn saag curry. I had a couple of really lovely walks, enjoyed driving on the island (don’t forget to wave at every local that passes you in their car!) and of course the odd few beers. I highly recommend a trip to this magical place.

On a more meta level, it’s really heightened my desire to improve my surfing, because I see it as such a wholesome hobby that really allows you to get much closer to nature both in terms of thinking about the weather but also being in the sea; as well as an incredible way to keep fit both in terms of cardio, flexibility and coordination; and lastly because of the kind of people that surfing attracts. Everyone that was on the tour and the instructors were brilliant people who I really enjoyed spending time with. I think surfing is also probably a really great way to experience a place and a culture as long as you are respectful of your environs.

To this end, I want to try to surf at least every couple of weeks and aim to have a week away every Summer.  Furthermore I think this trip opened my eyes to the fact that camping is a brilliant way to get closer to nature, so I’m now considering that maybe every few weeks, I should head to a beach, camp there, surf the evening and surf the morning – a really efficient way of having an enjoyable & exciting trip.

I made a promise to myself that I was going to stay away from any emails during this trip, and I managed to do that. I’m hoping that this means I return to both my clinical and non-clinical work with renewed energy and passion, and that I can work on making sure that the second half of this year is as good as the first half.

1. What do I have to work on the next few days?

2. What deadlines do I have coming up?

3. Are there any new projects I have time to start working on?

Not really, need to finish a few things first!

4. What went wrong over the past week? What lessons can I learn from that?

5. What went right over the past week? How can I make sure more of that happens?

I new I wanted to do a surf trip, so I went ahead and was proactive about setting aside the time, booking it – and it was a great thing to do.

To make more of this happen, you need to listen to these desires and make sure you act on them…

6. How well am I keeping up with all my duties and obligations?

7. What is coming up that I need to be prepared for?

9. Is everything I’m doing contributing to my advancement towards my goals? What can I do about the stuff that isn’t?

Interestingly, looking at the goals I put in place in February (my last weekly review), almost all of them have come together nicely:

This just goes to show how important goal setting is – it really directs your thoughts.

Complete the workstreams described above.

Have made a clear plan for what I am doing August/September onwards.

Attend the CCIO Summer School around this time next month to network and present and ensure I’m up to date with all that’s happening in digital health throughout the UK.